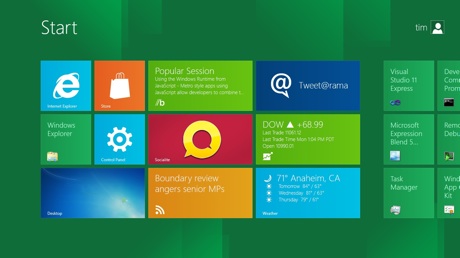 Last week we reported that Microsoft is looking to drop the “Metro” branding for forthcoming Windows 8 OS system in fear of a lawsuit regarding the naming and branding of the display.

Microsoft made the call internally and in a statement to developers it asked them to stop using the term “Metro” to describe the interface when marketing their apps and software, which was effective immediately.

Since then however, Microsoft has had its employees branding the style as “Modern UI Style” when referring to the Windows 8 screen, and whole system is called the “Modern UI” design.

Rumours regarding the sudden name drop include legal threats by a German retail company named Metro AG and a dispute between Microsoft and one of its European partner companies. Due to the sudden nature of this news Microsoft has not even had time to announce a new name for its trademark styling, and for now it will simply be known as ‘Windows 8-style UI’ until an official title is granted.

An internal memo revealed that the company was planning to select its Metro branding replacement last week, but the company is still yet to officially name the replacement.

We are sure Microsoft will come up with some snappy and jazzy name for the UI system in time but at the moment it’s just the “Modern UI Style”.

Gamer Numbers To Rise In The New Decade – Will You Be One Of Them?

Privacy App Required? We Had A Look At Telegram

WiFi 6 Is Internet Of Things Ready! – What Is It, Do You Need It?

Posted by Morgan Walker on 5 September, 2019

Gadget Helpline is part of the TMTI group of companies.© Copyright TMTI Ltd 2011, all rights reserved.